My time at the Black Culture Market

I recently visited the Black Culture Market with some aims:

Anthony Joshua made an impassioned speech in 2020 about supporting black owned businesses and was called racist. I found that strange, cos I saw his intention as the opposite.

The message behind the speech was AJ (and many others) encouraging consumers to buy amazing products from black owned businesses in an attempt to highlight the wealth disparity in the UK.

A study conducted by the Runnymede Trust, the UK’s leading race equality think-tank, highlights the economic differences between ethnic groups in Britain today.

Some really interesting stats from the report, finding that black African and Bangladeshi households have 10 times less wealth than White British people.

It also found that Indian households have 90–95p for every £1 of White British wealth, Pakistani households have around 50p, Black Caribbean around 20p, and Black African and Bangladeshi approximately 10p.

Like Anthony Joshua, when I see these stats, I’m compelled to look for black owned stores to buy certain products. I want to be part of the drive in providing a better present and future for my race. As you can see by the diagram, we have a long way to go.

The beauty of the market

I took my time waling around the market, spending time at the stalls to find out more information about the products. Like all markets, you are in danger of spending your money on other bits if you aren’t focussed and stay on task.

My task was simple: find myself an artist who sells prints and/or paintings. As I was nearing the end of my lap, the realisation was clear, I wasn’t going to find myself any paintings this time round.

It wasn’t until I got to the stall next to Mike’s, I found the vendor, Koko Krafts

He had so many original canvases on display. Each painting had its own special message, and after asking him which were his favourites, I saw my future paintings.

After expertly negotiating 2 paintings, we spoke more about his business. I found out that he and his partner want to build an art gallery, and are using the sales in their products to fund the construction.

After negotiating my paintings, Nana told me about the project and aims of Koko Krafts. They are using proceeds from their sales to build an art gallery in Ghana

They truly have a great back story to how they got started, and also have a clear vision of where they want to be. Really proud of them and what they are aspiring too 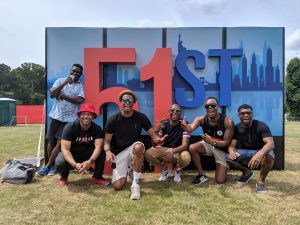 I was asked if I had drugs for sale, 4 times at a recent festival!!!